Vuic on Yellin, 'Our Mothers' War: American Women at Home and at the Front During World War II'

Following prepared remarks, Ms. Yellin responded to questions from the audience. C-SPAN has agreements with retailers that share a small percentage of your purchase price with our network. However, C-SPAN only receives this revenue if your book purchase is made using the links on this page. Please note that questions regarding fulfillment, customer service, privacy policies, or issues relating to your book orders should be directed to the Webmaster or administrator of the specific bookseller's site and are their sole responsibility.

SIMILAR BOOKS SUGGESTED BY OUR CRITICS:

Telephone lines were open for comments on news of the day. After two female pilots were killed in crashes attributed to unexplained ''equipment failure,'' officials found that someone had put sugar in the engine of the second plane.

The investigation was quickly shut down, and the findings were kept quiet. View all New York Times newsletters.

Even women working for the enemy ran into the peculiarities of American sexism. In a fascinating chapter on female spies and propagandists on both sides, Yellin writes about Mildred Gillars, who moved to Germany when she fell in love with a Nazi. Known to American troops as Axis Sally, she broadcast anti-American, anti-Semitic radio programs, and sometimes visited P. There she invited prisoners to tape messages for their families, then spliced in her own vitriolic remarks. 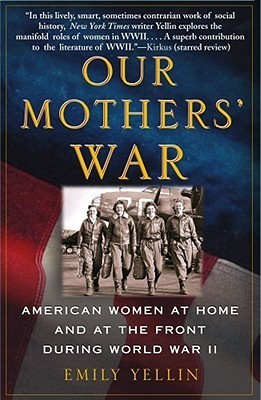 After the war she was brought back to the United States and tried on 10 counts of treason -- with ample evidence, for the government had recordings of many of her hate-filled broadcasts, as well as testimony from former P. Yet she was convicted on only one count: she had acted in an anti-American radio play about D-Day, portraying a Midwestern mom.

For this, which was apparently deemed the ultimate betrayal, she got 10 to 30 years. Yellin, a journalist based in Memphis, has done first-rate research and reporting; but too often she pulls back just at the point where her powerful material demands critical analysis.

In view of the long association between war and sexual violence, for instance, the stark symbolism of ''nose art'' -- those heavily sexualized paintings of women splayed across the noses of many fighting planes -- calls for a far more thoughtful response than the benign reportage it receives here. Similarly, while she describes the hounding and internment of Japanese-Americans in unflinching detail, she sums up the policy as ''at the very least.

No, racism and misogyny, operating full force during the nation's otherwise finest hours. What she does include, eloquently, is a tribute to her late mother, whose wartime letters inspired the book. A Red Cross worker in Saipan and a spirited, committed feminist, Carol Lynn Yellin and her millions of sisters left a legacy that deserves to be honored as vigorously as they themselves tackled the war years.

The history of her own 's is long overdue for a rewrite, and ''Our Mothers' War'' is a fine first step. Please upgrade your browser. Now, Our Mothers' War re-creates what American women from all walks of life were doing and thinking, on the home front and abroad.

Like all great histories, Our Mothers' War began with an illuminating discovery. After finding a journal and letters her mother had written while serving with the Red Cross in the Pacific, journalist Emily Yellin started unearthing what her mother and other women of her mother's generation went through during a time when their country asked them to step into roles they had never been invited, or allowed, to fill before. Drawing on a wide range of sources, including personal interviews and previously unpublished letters and diaries, Yellin shows what went on in the hearts and minds of the real women behind the female images of World War II -- women working in war plants; mothers and wives sending their husbands and sons off to war and sometimes death; women joining the military for the first time in American history; nurses operating in battle zones in Europe, Africa, and the Pacific; and housewives coping with rationing.

Yellin also delves into lesser-known stories, including: tales of female spies, pilots, movie stars, baseball players, politicians, prostitutes, journalists, and even fictional characters; firsthand accounts from the wives of the scientists who created the atomic bomb at Los Alamos, African-American women who faced Jim Crow segregation laws at home even as their men were fighting enemy bigotry and injustice abroad, and Japanese-American women locked up as prisoners in their own country.

Yellin explains how Wonder Woman was created in to fight the Nazi menace and became the first female comic book superhero, as well as how Marilyn Monroe was discovered in while working with her mother-in-law packing parachutes at a war plant in Burbank, California. Our Mothers' War gives center stage to those who might be called "the other American soldiers.